< Back to All Press

Sustainable viticulture is being talked about quite a bit recently. Since we practice it, we feel it may be is useful to present it in detail.

Vitis Vinifera is the vine species that makes most of the wines of the world. Vitis Vinifera is not native to the USA. Its native habitat is in the Old World from western Europe to the Middle East. While in its native habitat vitis vinifera was never exposed to most fungal diseases that it is treated for today. And therefore, it did not develop immunity to them. In the period between 1850 and 1880, with commerce increasing between the New World and Europe, somehow various diseases native to the Americas, such as oidium (powdery mildew), Peronospora (downy mildew), black rot and others crossed the Atlantic. Interestingly there was no word then for mildew in the French language and so the phonetic version "mildiou" was adopted to describe this new threat.

It is said that some British people (because we like to blame everything on the Brits) took some native American vines, belonging to vitis labrusca, to Europe to beautify their gardens. With that, phylloxera (known as the root louse) was transported as well on the roots of these vines. Phylloxera lives on the roots of vitis labrusca in many parts of the USA. But because this species had very tough roots the louse barely survives. Whereas vitis vinifera has very tender roots and when the louse found them it found food. Then it literally exploded and by 1880 most vineyards in Europe were mowed down by it. The only way viticulture could continue in Europe was to graft vitis vinifera material on vitis labrusca roots. There are a few exceptions such as in Chile, where vines still grow on their own roots.

And in order to combat mildew and other fungal diseases the French developed "Bouillie Bordelaise" which is a combination of copper sulfate and lime. I read a story once that its antifungal properties were discovered serendipitously as alley ways around vineyards were being sprayed with copper sulfate to keep the dust down. When mildews began to show up, the rows next to the alley ways remained clean of disease and hence it was concluded that the drift from the spray to keep the dust down was suppressing the mildews. For the longest time thanks to that discovery that is how viticulture survived and prospered in Europe. Bouillie Bordelaise is still used today in organic viticulture.

Without grafting and without copper sulfate or a synthetic equivalent, there would be no viticulture anymore. Copper sulfate is a pesticide regulated by EPA.

In 2014 while we were on a cruise that we organized for our Paumanok Wine Club we visited a winery on the island of Mallorca, in the Balearic Islands of Spain. While on our tour, the guide was stressing how eco-friendly they were as they used no pesticides. That piqued my interest as I thought I might learn something. So, I inquired how do they manage since Peronospora is established there. She said they used copper sulfate and sulfur. OK. Are these not pesticides? No, she said because they were organic. In this business to qualify for the organic designation such product must occur naturally and be mined. The exact same product if produced commercially cannot be designated organic. Yet no one has demonstrated that there is a chemical difference with these products whether mined or produced. But it is interesting that in the mind of this tour guide because it was "organic" therefore it was not a pesticide. She was sincere but I thought she was misinformed and decided not to make a scene with the rest of the group.

At Paumanok where I also conduct tours, I frequently get asked whether we practice organic viticulture. I usually say, 'before I answer that question, can you tell me what is your understanding of organic"?" More often than not I hear something like "I don't know, but probably that no pesticides are used, right?"  or "Organic is not toxic".

If the vines must be treated with pesticides, we want to use the least toxic pesticides. This is because we live on our farm and I do not want my family and especially my grandchildren to be exposed to unnecessary toxicity. Because we also have workers who work in the vineyards and because we have neighbors who border our vineyards. We want the least toxic pesticides whether they are considered "conventional" or " organic". So, the discussion should be about toxicity, whether organic, conventional or biodynamic, since all these methods use pesticides

It is now several decades since Rachel Carson wrote the Silent Spring, illustrating among other things how DDT decimated animal life as it was a very potent and broad-spectrum insecticide that accumulated in the environment and did not break down easily. It was an awakening about how humanity blindly was trusting industry. That was followed shortly after by finding out that smoking cigarettes caused cancer. And the world increasingly started doubting science. Thankfully and as a result the EPA was created in America and most industrial countries took similar action. Today pesticide production and use are highly regulated. And a premium is placed on low risk low toxicity pesticides.

In that new environment since the advent of new narrowly targeted pesticides that the EPA ranks as "low risk fast track" there are good choices and we find that there are better solutions that are less toxic if we take advantage of these products. Does that make them better than organic products? Well, consider this: Arsenic, a natural element found in some rocks, was heavily used in agriculture as a pesticide. It accumulates in the soil but also in the body and it can kill you. Because it is elemental, and it is mined it is considered "organic". Thankfully Arsenic is now banned. What about copper sulfate or other copper products that are organic and used to combat fungal diseases?  Copper is a heavy metal. While it is an essential micronutrient, in high doses it is toxic to human beings. It is toxic to fish and wildlife.

Inorganic pesticides like iron phosphate and copper sulfate don't break down in the same way as organic pesticides. These soils get sanitized over time killing the beneficial earth worms. The earth worms are vital for a successful viticulture as in the process of digesting organic matter in the soil they liberate free nitrogen that the vines need as a nutrient. It is for that reason that we do not fertilize our soil. And it is an added reason why we prefer not to use copper products but instead use less toxic synthetic products. The idea that because it is synthetic it is bad for you is all about ignorance because organic can be a lot worse in some cases.

When copper ends up in soil it strongly attaches to organic matter and minerals. As a result, it does not travel very far after release and it hardly ever enters groundwater.

Copper can interrupt the activity in soils, as it negatively influences the activity of microorganisms and earthworms. The decomposition of organic matter may seriously slow down because of this.

When the soils of farmland are polluted with copper, animals will absorb concentrations that are damaging to their health. Mainly sheep suffer a great deal from copper poisoning, because the effects of copper are manifesting at fairly low concentrations. 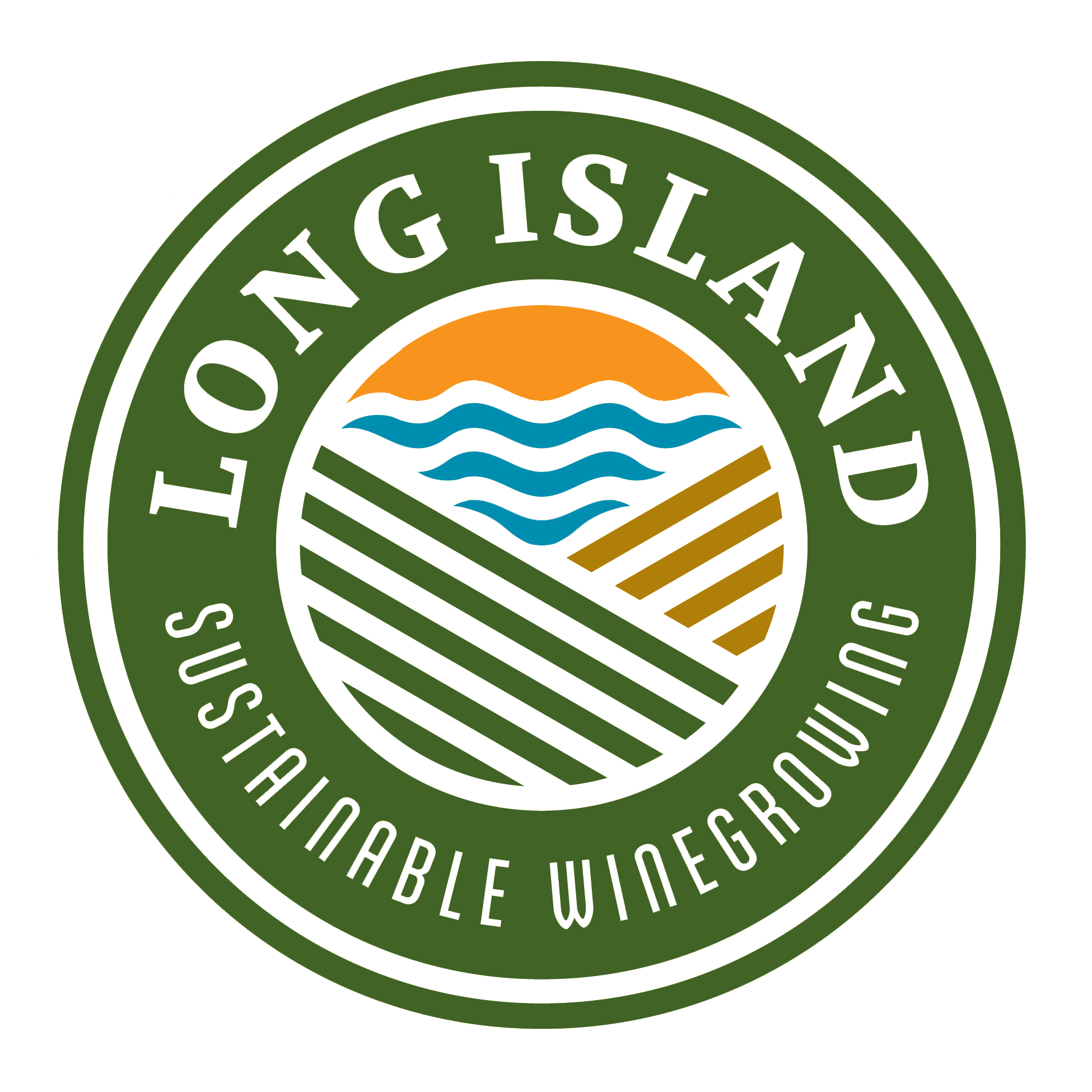 So, in conclusion we chose the least toxic products to treat our vines, some of them may be labeled organic. Others are synthetic. We do so as we think the consumer should want us to be the least toxic possible and so do we. And that is the point: low toxicity first and foremost. Growing for quality and growing sustain-ably are not mutually exclusive goals, in fact, they are one and the same goal. On Long Island the wine industry has developed Long Island Sustainable Winegrowing (LISW), of which we are a member.  LISW is an organization that has developed best practices to be good stewards of our land and our environment. These include a selection of the least toxic pesticide that can be used by its members. We adhere to these choices. ( http://www.lisustainablewine.org/ ) We are focused on the goal of growing the healthiest, ripest fruit obtainable as there is no other way to produce great wine. We remain open-minded about the method (sustainable, organic, biodynamic, conventional, etc.) but focused on the goal.

The European Union has recently restricted the use of copper products in viticulture in particular for the same reasons described above.

What was described here is what we do in viticulture. That does not mean that we should be skeptical of organic farming in other agricultural sectors, as usually such farmers have great intentions.  Using lettuce, for example, I prefer an organic lettuce because such lettuce is probably grown without any pesticides. Because it does not need them. There are many such produce that would fall in this category, like parsley, mint, scallions and so on. But when it comes to agricultural products like grapes, apples, pears, peaches and the like that take a long time to develop and ripen then the understanding of toxicity becomes important. And if it was not apparent so far then let me say it again, at Paumanok what we worry about is toxicity, that is toxicity to our family, our workers, our neighbors and the earth worms. And for us to say we practice organic viticulture would negate our goal to be the least toxic possible. Therefore, to be the least toxic possible we prefer to use the least toxic pesticides and today these include synthetic products. We call that sustainability.

Notes: This article contains quotes from other articles available on the web at the following links: